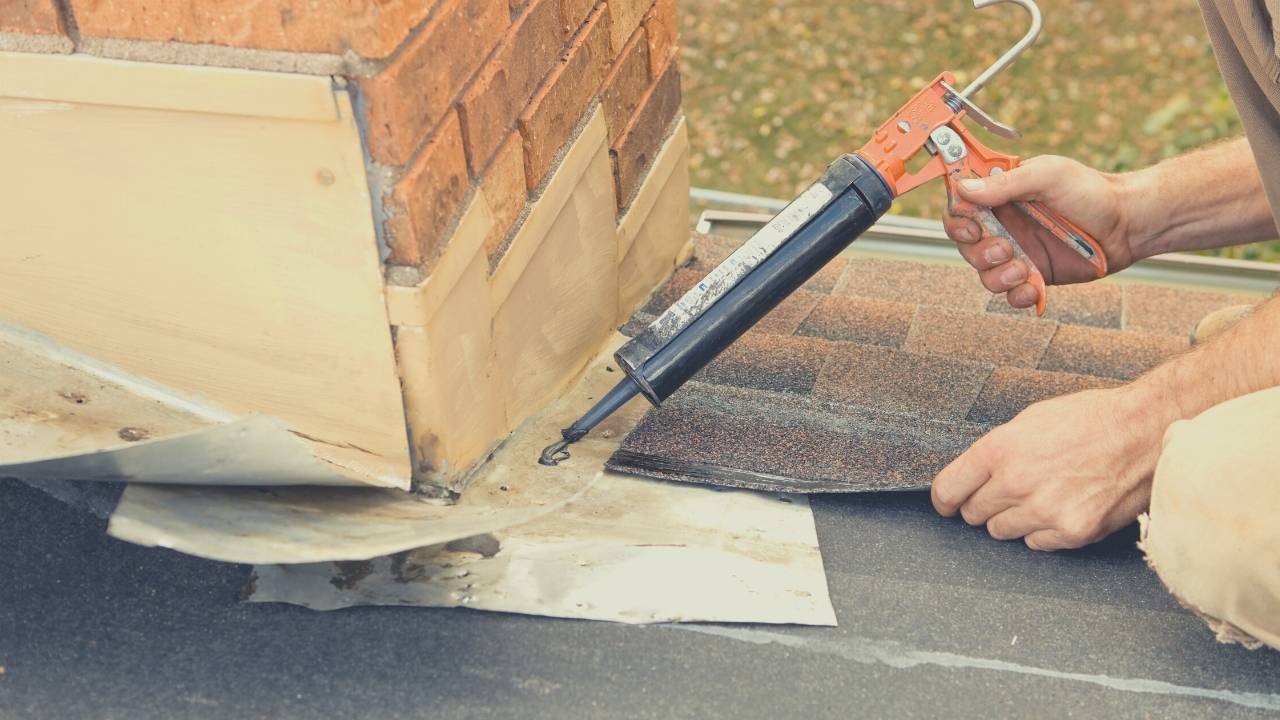 Chimney Flashing – How to Tell if It’s Bad and What to Do About It?

Is your chimney leaking in spite of having a chimney cap and crown? That’s most probably caused by a bad chimney flashing.

Even though a chimney flashing serves an important purpose of protecting your chimney against water damage, it’s often neglected by homeowners. The result of which can not only be costly but also dangerous in most cases.

Understanding the role of chimney flashing, its various types, advantages, maintenance, and repairs goes a long way in keeping your chimney safe from water damage. Knowing how chimney flashings work and when to seek professional help will save your chimney from avoidable damage and costly repairs.

That’s why we’ll be taking an in-depth look at chimney flashings.

So, let’s start with the basics.

What Is a Chimney Flashing?

Chimney flashing is a covering of metal sheets used to protect your chimney against water damage. Since the area where the chimney meets the roof is exposed to water penetration, a chimney flashing is applied to provide an airtight seal to prevent water from seeping inside and causing serious harm to your chimney.

A chimney without metal flashing or with a bad chimney flashing is prone to leaks. A cracked or damaged chimney flashing not only damages your roof due to water penetration, but also puts the structural integrity of your chimney at stake.

A chimney flashing can be classified into various parts depending upon the area which it has to cover. The details are as follows:

For a perfect seal, your step flashing should be a few inches longer than the shingle exposure. And when installing, one part should be under the shingle while the other should be over it. Often people with little to no experience of flashings do it the wrong way which increases the chances of leaks in the flashing. Not only that, it also makes it harder and costlier to fix, since all shingles around the edge will have to be removed to ensure that the flashing is installed correctly.

Counter flashing is used to cover the upper edge of the base flashings (at the bottom) e.g. step flashing, and prevent leaks by directing the water down the roof or through a gutter.

Counter flashing is usually sawed into the chimney mortar joints between the bricks, provides an extra layer of protection, and comes over the brick top.

The best time to install counter flashing is while laying the chimney bricks. However, workers usually avoid that because of the extra effort involved. If not, you’ll need to cut out a ridge and apply a sealant afterward. The latter is problematic because the sealant wears down after some time, making it susceptible to leaks.

Pro Tip: Install counter flashing higher on the chimney walls to prevent water from getting under the shingles.

Also called a saddle flashing, a chimney cricket is a mini-roof, of sorts, constructed at the back of your chimney to divert water away from the chimney.

A chimney cricket has angled edges and is usually shaped like a triangle. Roofers build a wooden structure of the chimney cricket on top of which metal flashing is installed.

If there isn’t a chimney cricket installed at the back of your chimney, there’s a danger of a water pool at the rear of your chimney that can deteriorate the mortar joints and crack the chimney bricks. That’s because when water rolls down the roof, it hits the back end of your chimney. While it does drain off eventually, but usually it does so slowly, causing damage.

What Are the Types of Chimney Flashing Installed on a Chimney?

Chimney flashings come in various types depending upon the material used. While each of these types has its fair shares of advantages and drawbacks, the type of flashing you should install for your chimney depends upon various factors. These include the size of your chimney, its shape, surrounding weather conditions, and the material of the roof.

The following table gives a comparison of the most common types of chimney flashings to help you decide which one’s the best for you.

Flash seals and sealing cloth are normally used to repair a damaged chimney flashing. While it’s a cheaper alternative, it’s best to use as a last resort only. That’s because it’s not sustainable.

Dangers of a Bad Chimney Flashing

Did you move into your new home? Or maybe it’s been a while since you had your last chimney inspection. In both these scenarios, there’s a chance that some of your chimney parts might be broken and in need of repairs or replacement. Your chimney flashing is one of those parts.

A damaged chimney flashing results in water penetration. When water enters your chimney, it seeps inside the mortar joints, disintegrating them. It could also cause your bricks to crack and, if ignored, put the whole brick and mortar structure of your chimney at risk of falling down due to damaged and broken bricks.

But that’s not all. A bad chimney flashing doesn’t just put your chimney at risk but your roof and attic also bear the consequences.

Leaking water results in the growth of mold that is not only hazardous to your health but also damages walls, ceiling tiles, and wood framing. Moreover, water can also cause fire to break if it reaches the electrical wiring. And did we mention the danger of electrocution?

Leaking water also ruins the paints, causes wall stains, and expands and ruins the plaster. Then there’s the property damage in the form of ceiling damage.

We’re not here to scare you off with such graphic descriptions of the harms of a damaged chimney. The purpose is to raise awareness so that you can avoid these disastrous situations. To do that, it’s crucial to look out for bad chimney flashing signs. And if you do, call for professional help to repair or replace your damaged chimney flashing immediately, to avoid further damage.

But how do you know your chimney flashing is leaking? Here are some of the most obvious signs:

Dripping sounds coming from the chimney signal an unattended leak. While there are various causes of a chimney leak e.g. a damaged chimney crown, the most common one is a bad chimney flashing.

When water enters a chimney through a leak, it causes various parts of your chimney e.g. chimney damper, firebox, etc. to catch rust. So, if you find rust on your firebox or chimney damper that probably means that your chimney flashing isn’t installed properly or is damaged and letting water inside.

Signs of Damage on the Chimney Flashing

If you notice any of the signs mentioned above, call a professional to get your chimney flashing repaired to avoid serious water damage that we’ve already discussed in the preceding paragraphs.

If left unattended, a bad chimney flashing will cause more and more damage to your chimney’s brick and mortar structure, roof, and attic. This can not only be dangerous but can also drastically increase repair costs.

Chimney flashing repair usually means resealing leakage spots in your flashing, provided that your chimney has been correctly installed and hasn’t wrapped. Polyurethane caulk or roofing cement is usually used for resealing the leaks.

As an estimate, a chimney flashing replacement could cost you anywhere from $800 to $1500.

A bad chimney flashing can cause serious damage, not only to your chimney but also to your drywall and attic. However, due to its location, it’s not easy to detect. That’s why, often, people find out about their bad chimney flashings after the damage has been done. Therefore, an annual chimney inspection is mandatory.